A set I found on a memory stick. 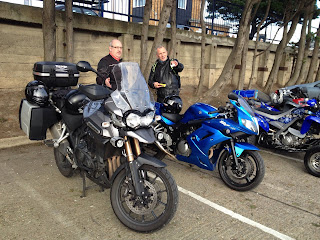 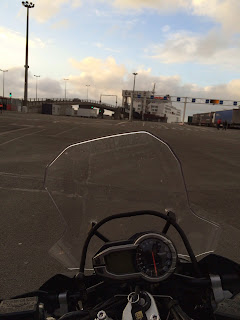 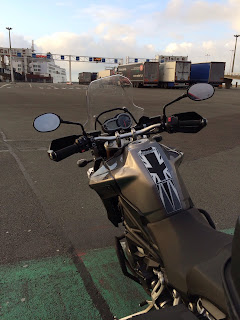 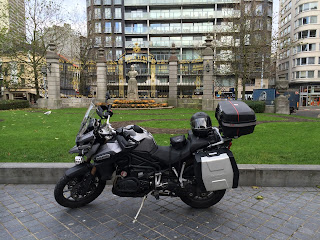 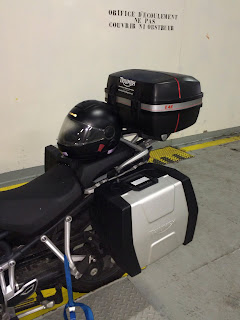 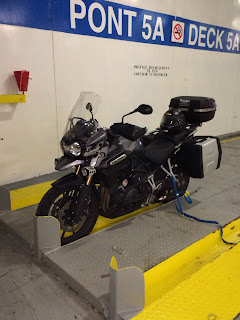 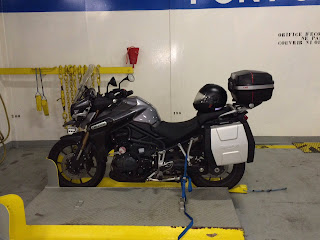 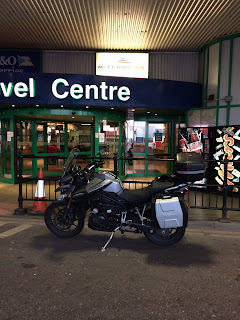 Posted by InvictaMoto at 18:26 No comments:

Döra has gone to a new home after two years. 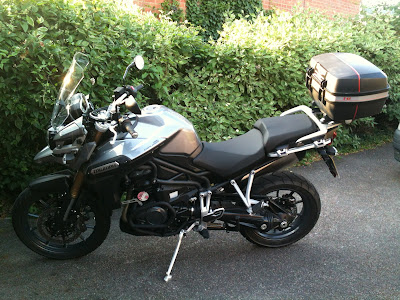 Döra and I set off in good time. After the strike and rioting by migrants in Calais, both ferry and shuttle services had been suspended.

In the end it was plain sailing into the terminal and checking in was a couple of minutes. Then we found the service had a twenty minute delay!

I took a few photos once underway!

The train has lots of bikes all, except me, going to Assen for the TT. 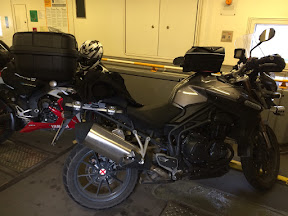 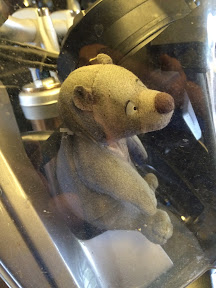 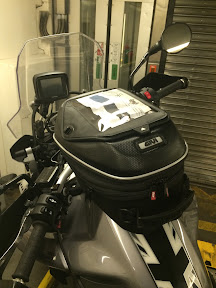 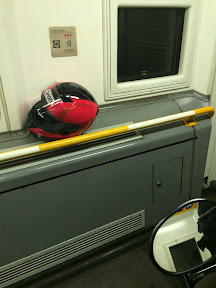 The plan was simply to head down the coast road, have coffee, have lunch and then return.

The first stop was Escalles for coffee only to find the usual cafe by the campsite is closed on a Wednesday.

Next Wissant. Market day and access to the square blocked!

So I headed towards the Todt Battery and found a new(ish) hotel and brasserie. Perfect for that first coffee of the day. 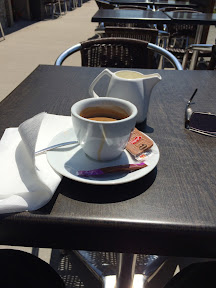 As it was lunchtime perhaps a little light lunch. Croque Monsieur. 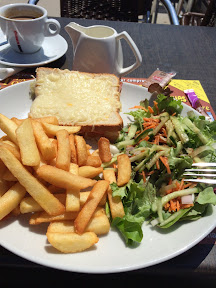 I hadn't expected chips and salad. In the end I ate the croque and half of the chips! Full!!!

Another coffee and think what to do for the next hour and a bit before I have to go back... 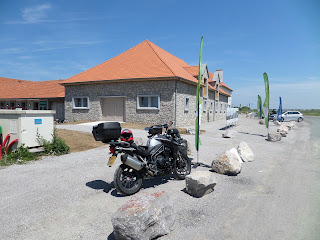 From the restaurant I turned south to take a look at the 39-45 Museum. I've not been in this one as yet. Maybe on another trip. 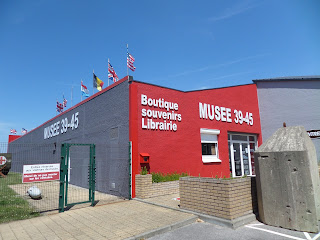 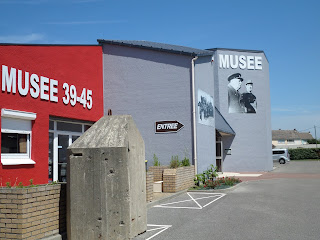 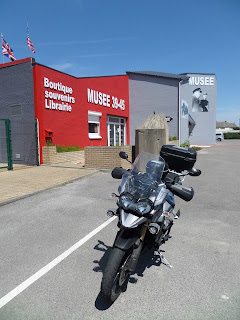 From the Museum I headed north again as I had just over an hour left before check-in. I made a few stops at other places I have ridden past to take a few photos. 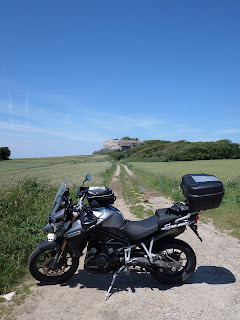 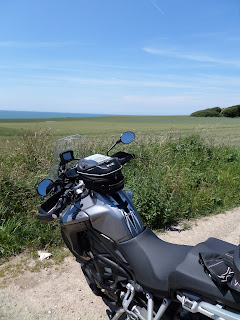 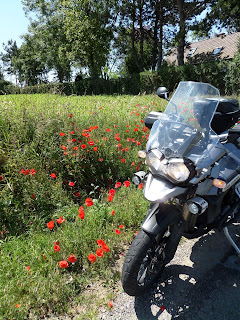 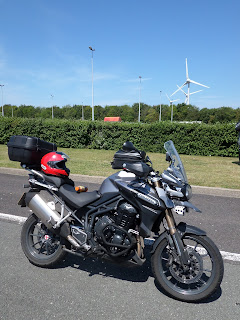 - Posted using BlogPress from my iPhone
Posted by InvictaMoto at 12:36 3 comments:

I've had a day trip ticket for me and the bike for a while and with it running out I decided, after a courtesy call from Eurotunnel, to book it sooner rather than later.

So June 24th I have a half day across the Channel. I should have been more adventurous but in the end I decided to go out about 1030 and come back about 1600. The way the trains run at this time of the year meant I could only book 1020 and 1550. Other trains full or at least no motorcycle spaces left.

I'm still getting back into biking again and starting to enjoy the freedom.

Fingers crossed that the weather holds up.

- Posted using BlogPress from my iPhone

Picked her up about 11am today and had a chat in the shop. Had a look at a couple of Rocket 3's outside.

The latest X model, only 500 for sale worldwide and 50 in UK, looks very big and butch, but outside my wallet!

There is another 2011 model. Loads of extras and more in my price range.... But depends on Döra's value. 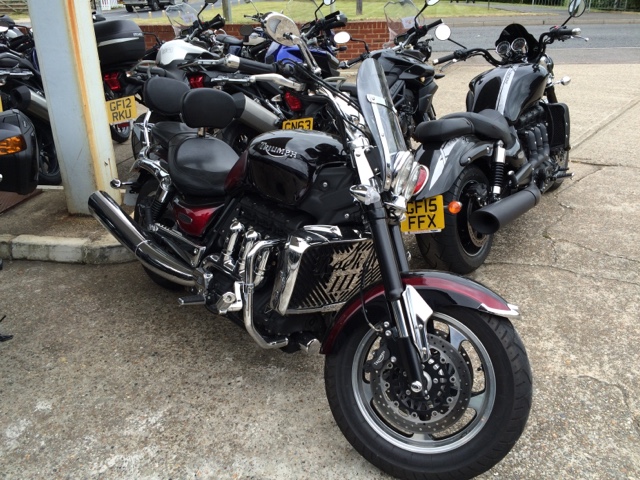 I set off and waved at Claire who was waiting but I had little or no petrol. All the trips had been reset so I have to set another in the mpgcalc app. Nerdy I know but I like to know the stats.

The first ride for three months was okay. It was good to be back on the bike again.

The slow relaxed gave 63.2 mpg on the display.

It's Meldrew's monthly meeting this Sunday so hopefully I can get some more miles under my belt.

Posted using BlogPress from my iPhone

A late call from Laguna came, when I was at cardiac rehab, that I missed as phones have to be off in the rehab area.  By the time I got a signal it was too late to pick her up tonight.  British Bike Night definitely missed.


Jim at Laguna said that they had put in a warranty claim to Triumph for the alarm and the battery, and although they had turned down the battery claim, they had approved the alarm claim!

The choice they had for me was to fit it, or not fit it and credit me with the cost of it to my account that effectively writes off the current bill as it stands.

As the alarm is a PITA I took the second option: no alarm and the credit to my account.

So I will pick her up tomorrow morning and it will be my first ride since the end of March.

Posted by InvictaMoto at 23:43 No comments:

I was hoping that Döra would be back so that my first ride since the heart-attack would be home obviously and then to the British Bike Night up the road at Charing in Kent.  This event is every June and mainly for classic bikes. The old bikes park in the car-park and modern bikes go in the adjoining fields.

But it was not to be.  Laguna called to say that the alarm was dead/kaput and the wanted to confirm that I wanted it to be removed and leave it at that.  They had fitted a new battery.  The bill would be, with labour, about £200. Gulp.

I said if it was definitely kaput then go ahead and remove it.

Posted by InvictaMoto at 18:00 No comments:

Another holiday... in a workshop

Döra continued to warble all Sunday and into Monday morning.  I stuffed a few towels around the unit to dull the noise.  We couldn't hear it in our house, but think maybe the neighbour nearer the garage might have.

Come Monday I pulled her out onto the drive and before half eight  called the Carol Nash Breakdown  (CN) number and logged a call.

Breakdown cover is provided as part of the annual insurance with CN.  There are cheaper policies and there are other breakdown services available. But every year I look and add the two together and CN have always come out cheaper and the service has always worked.  Luckily (touching wood!) I have used the breakdown service but nothing else. Phew.

Some 75 minutes later, a large van from SOS Recovery appeared on the drive. Together we pressed buttons on the key fob, all to no avail. I called Laguna and they said to bring it in.

So we loaded Döra into the van and he set off as I finished booking her into the workshop.  By the time I had loaded Reggie in the car and set off after him, arriving after she had been unloaded. As I got out of the car I could hear the peeping!

The technician wanted to get the noise to stop and had managed that okay with a special tool they have in the workshop. Checking the battery showed it was dead.

We agreed that they would work on it ASAP but it might be a few days as they had a workshop full of bikes already booked in.

I left it that if the alarm had failed they would remove it and I would most likely need a new battery.

Posted by InvictaMoto at 12:00 No comments:

The solar panel wasn't much of a success. So, instead I pulled the bike over to right outside the house and outfit on the mains powered charger. 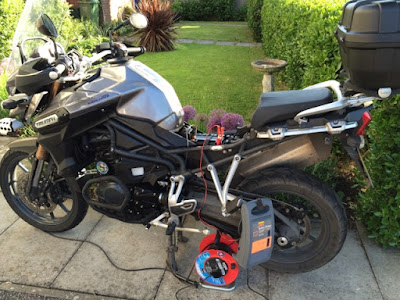 It was on the high setting and gradually some life came back as the alarm light started to flash in the rev counter.

The problem seems to be with the alarm. The charger shows a yellow light for charging and a green light for charged. Both are on! The alarm doesn't chime or flash the indicators on disarm but occasionally flashed on arm.

I gave it five hours on high charge and once I managed to disarm I tried to see if it would start. Putting the key in had the clocks lit up and it looked okay but the starter was dead.

I decided to put it away and for hours the alarm has been warbling with a faint peeping...

Tomorrow I'll call the breakdown and if they can't sort it Döra will have to go to Laguna.


- Posted using BlogPress from my iPhone
Posted by InvictaMoto at 19:08 1 comment:

In an attempt to make the most of the sunny weather I got out the solar charger I bought before the holiday and attached it to the bike.  It was on all day and er.... nothing.

I should have used it whilst I was away but there is nowhere to put it securely where it won't get stolen! The idea I had was that we would use my car to go on holiday, and Claire's would stay at home.  The panel would go on the back shelf of her Corsa and the wires out the tailgate and into the garage to the bike's battery. Great idea except my car was at the repairers after is was smashed by a clown in a van, so we had to use the Corsa to go to the airport.


It is supposed to output up to 15 watts and maintain a battery but I had expected seven hours in full sun that it might have out enough in to get the alarm to deactivate but it didn't.  Looks like I'll have to push it over to the house and hook up the mains electric powered charger.  If that fails. Looks like a call to the breakdown service!
Posted by InvictaMoto at 20:24 1 comment:

InvictaMoto
Riding since 1973 when I had a Vespa SS180. Currently own a 2015 Triumph Rocket III Roadster. Over the years I have owned bikes across the spectrum from grand tourers to race reps to dual sport/adventure to cruisers. Married to Claire and we have a patador dog called Reggie.